Charlize Theron and Her Icy Hot Glamour in Atomic Blonde 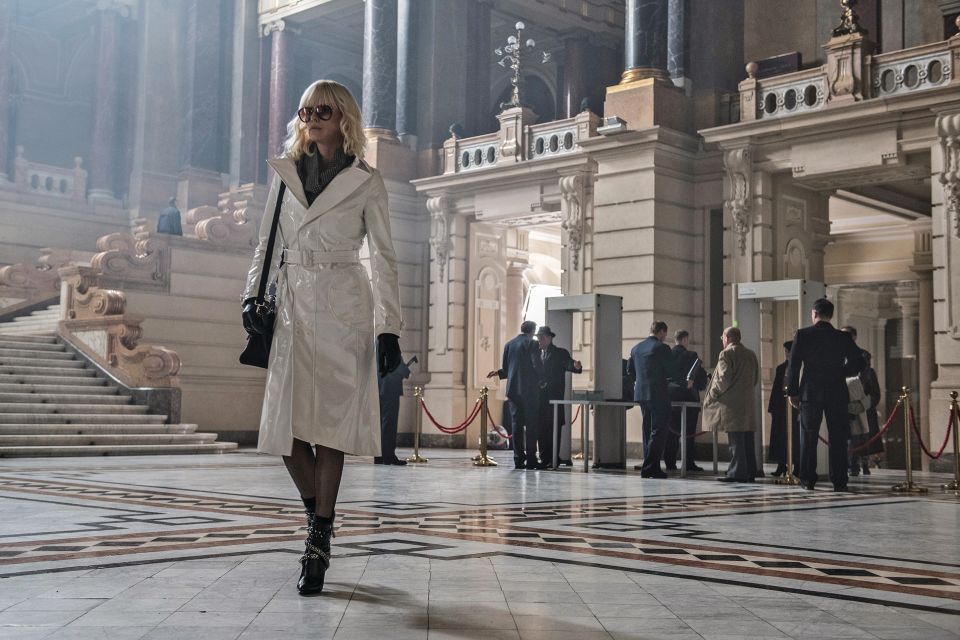 It’s not the fashions that make the actress. It’s the actress that makes the fashions. Charlize Theron is the undisputed ice queen of Hollywood Cinema and her fashion sensibilities (and those of her stylists) are on glorious display in her latest film, Atomic Blonde. The movie is a delicious viewing experience for lovers of glamour, sex appeal (the old-school version that leaves plenty to the imagination, not the pornographic obvious kind) and the sight of a beautiful woman wearing beautiful outfits while playing an emotionally-transfixing secret agent with a propensity for vodka on the rocks, French female spies, and ass-kicking.

Atomic Blonde isn’t a movie really. It’s more of a 2-hour fashion spread in digital video, complete with an 80’s pop soundtrack (New Order, Queen, Nena, Bowie, etc.). Between the black and white set pieces, the exquisite set designs and the notable and notably-stylized wardrobes, one can see the upper-most limits and limitations of the use of 1980s nostalgia in mainstream cinema as much as the role of clothing in character development.

What makes the film most memorable, however, is its starlet.

Charlize Theron has always possessed a rarefied mixture of cool sexuality with an icy demeanor and a preternaturally pretty face. From her ad campaigns for Dior to her roles in films like Head in the Clouds, 2 Days in the Valley and The Italian Job, her physicality and beauty are seemingly fused into a rare and transgressive iteration of contemporary glamour not often depicted in today’s films and television programs. What separates Theron from other actresses is her guileless star power and her lack of vanity. She is glittery and glorious in a seemingly natural way, with just that right amount of artifice that Angelina Jolie, with her fillered lips, vainglorious self-awareness and eating disordered frame can never be.

Theron’s performance in Atomic Blonde, while earning praise and press for an array of stunts, fight sequences and general girl spy badassness, would be best explored as a testament to the influence of haute couture in certain film circles with a little overdose of 1980s cold war nostalgia mixed in for good measure. The use of high fashion in Hollywood is nothing new and dates back to at least the 1940s. What make Atomic Blonde special in contemporary American cinema however is how the film becomes a vehicle for Ms. Theron’s iconography. Since she is a producer, you can bet that she was hands-on when it came to choosing the wardrobes and set pieces, all of which dramatically add to her steely reputation and untouchable aura.

There is no real drama or story line per se in Atomic Blonde. Big Hollywood blockbusters, and this is one of them, are immune to authentic character development and emotional story-telling. That’s not their point and it’s disingenuous for critics or others to criticize these films along those lines. Atomic Blonde is, however, a vehicle for Ms. Theron’s raw sexuality and cosmopolitan aura. While the term “cosmopolitan” has recently been warped into a pejorative in certain American political circles, Ms. Theron embodies everything that makes being a worldly woman sensually irresistible.

Born in South Africa and having lived in the United Kingdom and the USA, few actresses today travel across the semiotics of “Englishness” in all its global manifestations as well as she does. Her utterance of “cock sucker” is one of the nastiest, sexiest and best moments in Atomic Blonde”. It deserves it’s own avant garde release as a limited issue vinyl 7-inch single with a b-side of snippets from her turn in The Devil’s Advocate playing a good ol’ Southern girlfriend to Keanu Reeves.

For my money the most impressive aspect of Atomic Blonde is Ms. Theron all dressed up in Stuart Weitzman, Dior, Burberry, Max Mara, Yves Saint-Laurent, John Galliano collections from the 1980s and the current day. It’s not just a movie star wearing beautiful and fabulously expensive clothes that makes Atomic Blond so much fun and oh-so captivating in that Helmut Newton way. It’s how Ms. Theron wears those accoutrements with such dignity, danger, and effervescence that makes the film so special and a much-needed respite from the inane adolescence of super hero movies.

In fact, the film’s costumes end up becoming a supporting player in the story line: from James McAvoy’s bad boy faux military overcoat to the track suits and skater gear. The film’s costume designer Cindy Evans is interviewed at Fashionista where she illumines the sartorial variables involved in the conception and making of the movie.

Indeed Atomic Blonde is a film made with a rare visual sophistication that doesn’t get too caught up with itself and contributes to the flow of the film’s narrative in a way not seen since the John Wick films. In fact the film’s director, David Leitch, was also the director of John Wick, perhaps the masculine antipode to Atomic Blonde with its muscle cars, expensive suits and neonish lighting.

I can see a beautiful melding of universes in a future film: John Wick teams up with the Atomic Blonde to fight evil spies in Paris.

Somebody please make this movie!

From the fabulously glorious white trench coat to the Christian Dior stilettos Theron’s embrace of style counters today’s trend among many actresses to take on roles that make them appear ugly and un-desirable in a ridiculously vain attempt to transcend their looks so as to appear to have earned a certain movie star gravitas.It’s a foolish trend and someone needs to tell producers that the very reason we go to the movies is to see beautiful men and women look beautiful and sexy in the first place!

With the case of Charlize Theron, we have an actress (yes, I am using the “feminine” term and no, it’s not sexist) who, at the age of 41 is not afraid to fully display (in the literal and metaphorical sense) her unconventional beauty on screen without ever appearing vain in doing so. It is this quality that makes her mesmerizing. Theron has made a fine career of discerning curatorial statements when it comes to choosing roles in films that will maximize her looks without reducing her to a caricature.

There is almost a safely quotidian and accessible element to her smile and a fantastical steeliness to her personae as evidenced in such films such as Prometheus and Mad Max Fury Road and Snow White & the Huntsman.

For Atomic Blonde one has to congratulate the producers, stylists, director and other decision-makers for making eye candy for lovers of glamour, haute couture and eclecticism in a time when it seems Hollywood has lost its way when it comes to combining beauty with style and mystery.

The word is “alluring” and it is lost on so many of today’s actresses, singers, and others in the spotlight. With out-sized displays of crass pseudo-sexual potency and downright sluttiness masquerading as transgressive feminism today’s female celebrities, be they pop singers or actresses, appear to have confused glamour with attention-seeking. Ms. Theron’s career and performance in Atomic Blonde provide an alternative dignified model of sexual desirability and elegance, one that many of today’s females in the harsh starlight of fame would do well to learn from.